Traditional publishing has always looked down on people who self-publish (unless they are wildly successful, and then the big houses woo them). Because of that bias, people who self-publish often try to hide that fact. They make up a name for their “small press” and pretend it’s not just them. They avoid using the term “self-publishing,” instead talking about “e-books.” (E-books are one format for self-publishing, but not the only one, and obviously not all e-books are self-published.)
Self-publishing has a negative connotation, and frankly, it’s well-deserved. The vast majority of self-published books were and are bad. Badly written, poorly edited (or simply not edited at all), and clumsily designed. A couple of years back I went to a talk by librarians who had judged The New Mexico Book Awards, which is open to both traditional and self-published books. The librarians talked about why many books didn’t make it to the finals. Problems included spelling and grammar errors and using clip art that had nothing to do with the text. These books weren’t just not good, they were bad.
If that weren’t enough, self-published authors got a reputation for being aggressive. They were the ones at book fairs who would grab you and talk about their books until you bought one just to escape.
And yet these days the big buzz in the writing world is about self-publishing—often including success stories and predictions for a beautiful future. Now when I bring up the topic, most people are at least curious about the possibilities, whether they are beginning writers or well-published professionals.
I’m not exactly an outsider to traditional publishing. I’ve sold 12 books to publishers. My first novel, The Well of Sacrifice, is still in print after 12 years. But in recent months I’ve followed discussions about self-publishing and found the possibilities tempting. Joe Konrath, who writes thrillers, is one loud voice in favor of self-publishing. He started with traditional publishing, moved into self-publishing, and has been so successful that he now insists no serious author should accept a contract from a publisher.
Other voices are more moderate, and a number offer warnings, such as the often quoted statement that more self-published books will sell fewer than 100 copies than will sell more than 10,000 copies.
Still, I’ve weighed the pros and cons and decided to explore self-publishing myself. I’ll have two books out by the end of this month—a middle grade mystery set in ancient Egypt, The Eyes of Pharaoh, and an adult romantic suspense, Rattled. I’ll post about the experience here on Wednesdays—challenges and frustrations, surprises and (hopefully) successes.
Let me know your questions and I’ll try to address them. It’s a brave new world, and we can explore it together. 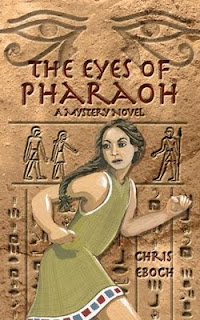 Email ThisBlogThis!Share to TwitterShare to FacebookShare to Pinterest
Labels: self-publishing