I’ll be going to the Left Coast Crime convention for mystery writers and fans over the next few days. I’m speaking on a panel about “Growing New Readers” and giving an individual talk on “What I Learned from Nancy Drew.” I’m also hosting a table at the banquet, where I’ll give out copies of my new books, Rattled and The Eyes of Pharaoh, to interested readers. I’ll ask them to write a review in exchange.
This convention was a big reason I chose to self-publish Rattled. My agent was interested in representing the book and thought we had a good chance of selling it traditionally. I wouldn’t have minded a traditional publishing deal, especially for my first book in a new category, romantic suspense for adults.
But it might have taken six months to a year to get a contract, and another year or two before the book came out. I would’ve missed this great opportunity to attend a convention of mystery lovers in my own backyard. In future years, Left Coast Crime will be in other cities, requiring a much more expensive trip.
Plus, I was getting tired of other people determining the pace of my career.
My agent was supportive when I told him I was considering self-publishing. He understands the opportunities and my desire to take advantage of them. So I edited the book based on his feedback, proofread it, got Lois Bradley to do the cover art, learned everything I could about self-publishing, and now have both print and e-book versions (Kindle and Nook) available. I had to pay express shipping and have the copies of Rattled sent to the conference hotel, but they should be there in time!
From what I’ve been learning about self-publishing, the most important thing is to get multiple good reviews online, and to make sure your book has appropriate tag words. Once you start this buzz, a good book can take off on its own. That’s why am trying to spread the word quickly, and why I’m willing to give away copies to highly interested readers (I figure that anyone who spend several hundred dollars to attend a convention, plus potentially airfare and hotel if they’re coming from out of town, is a highly interested reader). “Super readers” are also more likely to be active reviewing books on blogs, listserves, and social networking groups.
I’ll report back on the convention—and what the buzz was on self-publishing—next week. If you want to find out more about Left Coast Crime, visit their website. 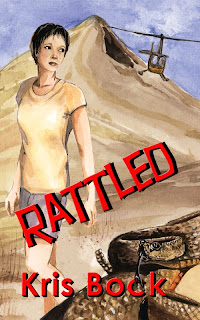