Get ready for #Halloween with #ghost stories that share #history!

“Haunted is a fun read with some thrills and chills and has the added bonus of some genuine, compassionate personalities.” - School Library Journal

“I LOVED this book. My daughter who is 11 could not put this book down. She read it so quickly and is asking for more!” 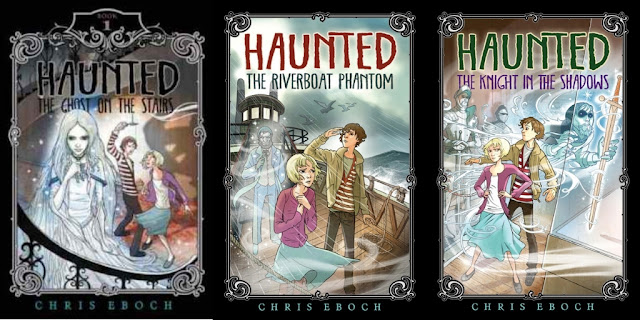 In my Haunted series, thirteen-year-old Jon and his eleven-year-old sister, Tania, are typical modern kids – except for the fact that Tania can communicate with ghosts.

In The Ghost on the Stairs, the kids help investigate a hundred-year-old tragedy in Colorado silver mining country. The Riverboat Phantom puts them on the Mississippi River on an antique riverboat. For The Ghost Miner’s Treasure, Jon and Tania travel to the Superstition Mountains of Arizona, where the ghost of an old miner is still looking for his lost mine.

In this series, the ghosts are being held in this world by something that happened in the past. In order to help free the ghosts, Jon and Tania must understand that past. 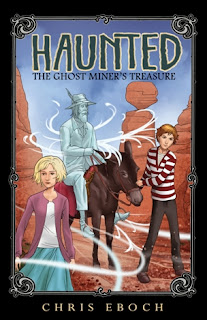 “My 10 year old daughter HATES to read. These books kept her interested and wanting to read more. I downloaded all 4 in this series. THANK YOU!!”
“What I loved most of all, was the way my 4th grade daughter got sucked into the story. She's a reluctant reader so it was a joy to see her completely absorbed in a book; she immediately started the second book in the series when she finished, and can't wait for more.” – Amazon readers
Get all four books in the series from Amazon, Barnes & Noble, or other retailers.
For writing advice that came from writing these books, see:


How Do You Turn Your Idea into a Story?
Developing Your Story for Children or Teenagers
Turning an Idea into a Story: Making Muscular Action!
Market Research: Personal Connections
The Drama of a Place
Paragraphing for Cliffhangers

See also my post on Learning #History through Ghost Stories for using books such as these in the classroom.

Jon can't see ghosts and didn't believe in them, but things are getting too crazy for any other explanation. And if softhearted Tania wants to help the ghosts, Jon will have to protect her and try to keep them both out of trouble.
First the siblings have to find out what happened to keep each ghost trapped in this world. Then they need to help the ghosts move on—sometimes by letting them take over Tania’s body. All this while dealing with their overprotective mother, a stepfather who’d want to exploit Tania’s gift, and a changing assortment of human troublemakers.
Life gets interesting when your sister sees ghosts. And the TV show’s shooting season is just beginning....

Learn more at https://chriseboch.com/ or her Amazon page, or check out her writing tips at her Write Like a Pro! blog.
Posted by Kris Bock at 3:00 AM No comments: