I've discussed cliffhangers before, but it's a subject worth revisiting. I read many manuscripts and even published books that don't take advantage of the power of a good cliffhanger. Back in June, I discussed how to focus on suspense rather than surprise for a cliffhanger. But what if your book doesn't have big physical action scenes? Or what if you need to end a chapter in a quieter moment, because that moment will be followed by a large jump in time or place?

You can still use a version of a cliffhanger. Try to focus on a moment that is powerful emotionally, and still looks toward the future, whether because of anticipation of what comes next or disappointment over what just happened.

In The Amethyst Road, by Louise Spiegler, the main character spends much of the book searching for her mother. She believes finding her mother will solve her problems, but instead of a joyful reunion, their meeting goes like this:

“Her gaze swept over me. The hollows in her cheeks and under her eyes stood out like smudges of dirt. It had been three years since I’d seen her, but she’d aged at least ten. Her expression was measuring, distrustful. She moved as if expecting harm.
I fell back. Did she fear me? Was it possible—did she not know who I was?

Serena pushes on, making contact, and finally explaining her problem to her mother. Serena's sister has had a baby, who has been taken by "The Cruelty," a sinister version of child protective services. This chapter ends with another twist against Serena's expectations and hope, a severe disappointment which will force her to start solving her problem from scratch:

Mother’s smile vanished. "But, Serena, how can I help? The Cruelty won't even let me care for my own children." She raised her face to mine. "Look at me. I can hardly help myself, daughter. How can I help you?

In I Am Jack by Susanne Gervay, Jack is having a problem at school, and desperately needs help. Even the frustration of not being able to get a mother's attention can provide a cliffhanger, as you see by this Chapter 1 ending:

At last, Mom to myself.  “Mom, Mom.” She is making dinner already and Samantha’s helping her with the pasta sauce.
“Later, Jack darling. When I’m finished making dinner.”
“Don’t call me darling, Mom.” I slump onto the couch. Later. That’s a joke. Rob will be here soon and then there will be dinner, washing up and I have to have a shower and there’s homework and television. Mom will be tired. There’ll be NO time and I HAVE to talk to Mom.
I think I’m in BIG trouble.

Sometimes you may even have a dramatic cliffhanger moment, but if you end the chapter there, you have only a couple of paragraphs before jumping to a new scene. It may feel more natural to end the chapter at the end of the scene or end of the day. That’s fine, if you still set up anticipation, as Joni Sensel does in The Farwalker's Quest:

They worked out a plan. After Pres left them to sleep, Ariel and Zeke only lay back and gazed at the ceiling. His toes, warm against her calf, seemed to say all that was needed between them. This night in a real bed would be the last for long time to come.

That last sentence emphasizes that their challenging journey isn't over yet. It's a quiet moment, but it promises more action to come. So go ahead and end in a quieter moment sometimes—so long as you're still looking forward.

Exercise: Go through your manuscript, or even a published book. Look for quiet chapter endings. Do they still drive the story forward, with anticipation for the future? If not, can you rewrite them so that they will?

Check back over the next two weeks for suggestions on minor story adjustments that can put power behind your cliffhangers, followed by a discussion of cliffhangers in picture books.
Posted by Kris Bock at 8:54 AM 2 comments:

The Story Chart, with John Martin

I'm visiting today with John Martin, author of The Bird and founder of Boys Read, an organization whose mission is “to transform boys into lifelong readers.” Here John shares his Story Chart, a tool for writers.
How and why did you come up with the Story Chart?

After watching an interview between Bill Moyer and Joseph Campbell, I got really interested in Campbell’s mythology books.  I read Hero With a Thousand Faces  and The Power of Myth.  I later took a screenwriting course and was introduced to Christopher Vogler’s book, Hero’s Journey [links go to brief summaries].  At this point, I had a head full mythology and story structure, but had no way to apply it to my own writing, much less teach it to others.  I decided I wanted to teach a writing workshop based on Campbell’s work.  In my corporate life, I had used structured templates for teaching adults conceptual methodologies.  By combining corporate teaching experience with writing experience, I was able to come up with the framework for my Story Chart. [Click on chart to see it full size.] 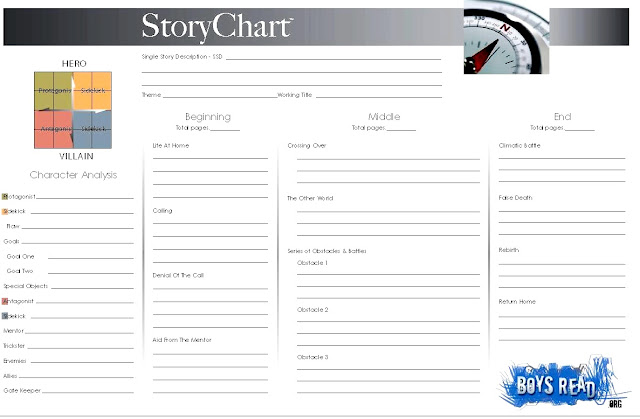 How has it helped you with your own work?

My Story Chart helps me as a plotting and rewrite tool.  I use the Story Chart in the beginning of the writing process.  It helps guide me through the rough water of getting a story launched from harbor and into open sea.  As a rewrite tool, I can often quickly identify where my vessel is drifting off course and where my lines need tightening to give my sails a little more boost.

Do you have any tips for using the chart?

Start by reading Vogel’s Hero’s Journey.  It’s easily understood.  If things click for you, go further with Campbell’s teaching.  Also, watch for the timeless structure in movies that you rent.  It’s very easy to spot in movies, especially with kids movies, modern and classics.
Posted by Kris Bock at 9:13 AM No comments:

The Drama of a Place

I've been discussing ways to add tension to your stories, by making better use of elements such as the villain or secondary characters. You can also look to your setting for more drama. Sometimes the possibilities are obvious. In my Mayan historical adventure, The Well of Sacrifice, I opened with the heroine gathering medicinal plants in the jungle, and running into a tribe of savages. In later chapters, she gets trapped inside the dead king’s sealed tomb, and then thrown into a sacrificial well. How's that for a dramatic use of setting!

But not every book has to have tombs or cliffs. Even everyday settings such as school or a suburban neighborhood can provide elements for adding drama, humor, or other interest.

In the Haunted books, the "setting" is a traveling ghost hunter TV show, with different specific settings for each book. In my first version of The Ghost on the Stairs, the kids watched some of the filming, but I didn’t use the TV show much. While expanding the novel, I added a chapter where they try out the ghost hunter gadgets, and another where their stepfather interviews people who have claimed to see the ghost. Both these offered opportunities for humor, as only the kids knew whether the gadgets were really working, and whether the interview subjects were telling the truth.

I used the individual settings specific to each book as well. The Riverboat Phantom takes place on a Mississippi steamboat, where action scenes include a fight in the boiler room and a ghost-induced hurricane on the top deck. The Knight in the Shadows starts at the Metropolitan Museum of Art and involves a subway journey to The Cloisters. The MET and The Cloisters are full of interesting elements. A subway is even more intriguing to a kid who's never been on one, but add a ghost to the mix, and you get action and humor.

Tip: Look for ways to use your setting to add complications. What if the weather changed? What if they went somewhere without cell phone reception? What if they had to pass through a bad neighborhood—or sneak through a rich gated community with a guard? If your setting could be Anywhere, USA, charge it up for dramatic value.

Example: Look at the movie Sweet Home Alabama. Would it be the same if the main character only had to go home to New Jersey?
Posted by Kris Bock at 9:27 AM 2 comments: