YA Medieval Historical Fiction for #teachers or #homeschool @MvonHassell

This book came to my attention recently and it might be useful for homeschooling students or teachers looking for supplemental fiction about medieval Europe. And the Kindle version is only $.99, if you want to check it out! 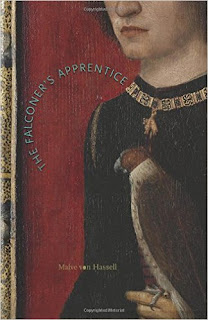 Andreas, an adventuresome 15-year old orphan, embarks on a precipitous flight across Europe to rescue the falcon Adela. A crotchety falconer, a secretive trader and his feisty daughter, a mysterious hermit, a young king in prison, an aging emperor, and an irascible Arab physician are among the principal characters in this action/adventure novel, set in the 13th century.

Written for readers age twelve and above, this coming-of-age story conveys life in medieval Europe, with bedbugs next to silver chalices, food ranging from the moldy to the sublime, and intellectual sophistication side by side with rank superstitions.

Original poetry by King Enzio, imprisoned in Bologna, and writings about falconry by Emperor Frederick II of Hohenstaufen are incorporated into the novel. The eight parts of the novel reflect the eight octagonal towers of the Castel del Monte, a critical turning point in the protagonist’s life.

Quote from a review:

"As I read, I was reminded of the old classic children's novels such as The Trumpeter of Krakow and The Door in the Wall. The lush historical details, the medieval time period, the characters who are good, brave young people trying to do the right thing during difficult times: these are books to be savored, not devoured. The Falconer's Apprentice fits right in with these Newbery Award winners. It's a fantastic book, one that parents can read to their entire family or that one person can enjoy at her leisure.

"I can see this being a terrific supplement for children/young adult studies of medieval European history."

You might read this book with Jennifer Bohnhoff's On Fledgling Wings, another coming-of-age story set in medieval Europe.

For more great historical fiction, visit the Mad about Middle Grade History blog (now defunct, but past posts are still useful).
Posted by Kris Bock at 4:00 AM No comments: