#NaNoWriMo and #PiBoIdMo - Developing Your Idea

Last week, I discussed National Novel Writing Month (NaNoWriMo) and Picture Book Idea Month (PiBoIdMo), both of which take place over the month of November. If you plan to participate, it helps to do some prep!

Here are some tips for developing your idea. (If you are doing NaNoWriMo, try to do this before you start writing in November. For PiBoIdMo, bookmark this post or print it out so you can use it as you brainstorm ideas next month.)

(The following is excerpted from You Can Write for Children: How to Write Great Stories, Articles, and Books for Kids and Teenagers. The book is available for the Kindle, in paperback, or in Large Print paperback. That book and Advanced Plotting will provide lots of help as you write and edit.) 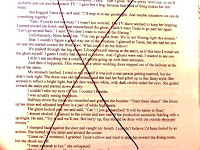 Technically, yes, but certain things should happen at those points.

1.   The beginning introduces a character with a problem or a goal.

2.  During the middle of the story, that character tries to solve the problem or reach the goal. He probably fails a few times and has to try something else. Or he may make progress through several steps along the way. He should not solve the problem on the first try, however.

3.  At the end, the main character solves the problem himself or reaches his goal through his own efforts.

You may find exceptions to these standard story rules, but it’s best to stick with the basics until you know and understand them. They are standard because they work!

Teachers working with beginning writers often see stories with no conflict – no problem or goal. The story is more of a “slice of life.” Things may happen, possibly even sweet or funny things, but the story does not seem to have a clear beginning, middle, and end; it lacks structure. Without conflict, the story is not that interesting.

You can have two basic types of conflict. An external conflict is something in the physical world. It could be a problem with another person, such as a bully at school, an annoying sibling, a criminal, or a fantastical being such as a troll or demon. External conflict would also include problems such as needing to travel a long distance in bad weather.

The other type of conflict is internal. This could be anything from fear of the dark to selfishness. It’s a problem within the main character that she has to overcome or come to terms with.

An internal conflict is often expressed in an external way. If a child is afraid of the dark, we need to see that fear in action. If she’s selfish, we need to see how selfishness is causing her problems. Note that the problems need to affect the child, not simply the adults around her. If a parent is annoyed or frustrated by a child’s behavior, that’s the parent’s problem, not the child’s. The child’s goal may be the opposite of the parent’s; the child may want to stay the same, while the parent wants the child to change.

For stories with internal conflict, the main character may or may not solve the external problem. The child who is afraid of the dark might get over that fear, or she might learn to live with it by keeping a flashlight by her bed. The child who is selfish and doesn’t want to share his toys might fail to achieve that goal. Instead, he might learn the benefits of sharing.

However the problem is resolved, remember that the child main character should drive the solution. No adults stepping in to solve the problem! In the case where a child and a parent have different goals, it won’t be satisfying to young readers if the parent “wins” by punishing the child. The child must see the benefit of changing and make a decision to do so.

A Story in Four Parts

If “beginning, middle, and end” doesn’t really help you, here’s another way to think of story structure. A story has four main parts: situation, complications, climax, and resolution. You need all of them to make your story work. (This is really the same as beginning, middle, and end, with the end broken into two parts, but the terms may be clearer.)

The situation should involve an interesting main character with a challenging problem or goal. Even this takes development. Maybe you have a great challenge, but aren’t sure why a character would have that goal. Or maybe your situation is interesting, but it doesn’t actually involve a problem.

For example, I wanted to write about a brother and sister who travel with a ghost hunter TV show. The girl can see ghosts, but the boy can’t. That gave me the characters and situation, but no problem or goal. Goals come from need or desire. What did they want that could sustain a series?

Tania feels sorry for the ghosts and wants to help them, while keeping her gift a secret from everyone but her brother. Jon wants to help and protect his sister, but sometimes he feels overwhelmed by the responsibility. Now we have characters with problems and goals. The story is off to a good start. (This became the four-book Haunted series.)

·   Make sure your idea is specific and narrow. Focus on an individual person and situation, not a universal concept. For example, don’t try to write about “racism.” Instead, write about one character facing racism in a particular situation.

·   The longer the story, the higher the stakes needed to sustain it. A short story character might want to win a contest; a novel character might need to save the world.

·   Ask why the goal is important to the character. Why does this particular individual desperately want to succeed in this challenge?

·   Ask why this goal is difficult. If reaching the goal is too easy, there is little tension and the story is too short. The goal should be possible, but just barely. It might even seem impossible. The reader should believe that the main character could fail.

·   Even if your main problem is external, try giving the character an internal flaw that contributes to the difficulty. This adds complications and also makes your character seem more real. For some internal flaws, see the seven deadly sins: lust, gluttony, greed, sloth, wrath, envy, and pride.

AdvancedPlotting is available in print or ebook at Amazon and Barnes & Noble, or in various ebook formats at Smashwords.
Posted by Kris Bock at 6:00 AM