On the Edge of Your Seat: Creating Suspense, by Sophie Masson

Part of keeping your reader’s attention throughout your novel is creating suspense, regardless of your novel’s genre. Here’s an excerpt from an essay in Advanced Plotting by guest author Sophie Masson:

On the Edge of Your Seat: Creating Suspense
Suspense is what keeps a reader reading—wanting to know what happens. The suspense can be of all kinds, from wanting to know who the baddie is in a thriller to wanting to know whether the heroine is going to choose Mr. A or Mr. B as her love interest, to—well, just about anything, really! Creating and maintaining suspense is important in any kind of story or novel; it is especially so in the kinds of genres that are built around suspense: mysteries, thrillers, spy stories, fantasy. Here are some of my tips, honed over years of writing in many of those genres!
First of all, to create suspense you need:
Some background information.
But incomplete knowledge.
That is, from the beginning the author needs to already have something set up—to let the reader know something about a character and their situation, or the suspense won’t happen—you have to care what happens for suspense to occur in the reader’s mind.
You can build towards that or start immediately with a suspenseful mysterious beginning, but there must not be too many clues as to what might happen or the suspense will fizzle out before it’s had a chance to happen. You need instead to build up the tension carefully, making the reader think that something is one way when it’s another. But at the same time you can’t play dirty tricks on them—you shouldn’t for instance at the climax suddenly produce a character that wasn’t there before—either in person or mentioned—as the villain, or the reader has a right to feel ripped off.
In my detective novel The Case of the Diamond Shadow, for instance, the true villain is hidden behind a smokescreen of red herrings—but is there all along. It’s just that nobody even thinks of them in connection with the crime!
Character is very important in suspense. I think that plot itself, the driving machine of a story, is really at heart the unfolding of interaction between characters, good and bad. That is what creates situations and fuels tension. So you need to feel strongly for your characters especially the one or ones from whose point of view the action is viewed from, but also the others with whom they interact. If the characters feel real to your readers, then they will see when someone is acting out of character—and that will immediately set up suspense. Or say your main character trusts someone—really trusts them—and little by little they begin to change their minds, to suspect they’re up to no good—excellent suspense too. 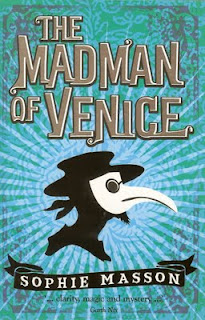 Sophie Masson has published more than 50 novels internationally since 1990, mainly for children and young adults. A bilingual French and English speaker, raised mostly in Australia, she has a master’s degree in French and English literature. Her most recent novel to be published in the USA, The Madman of Venice (Random House), was written for middle school children, grades ~6-10 and her recent historical novel, The Hunt for Ned Kelly (Scholastic Australia) won the prestigious Patricia Wrightson Prize for Children’s Literature in the 2011 NSW Premier’s Literary Awards. www.sophiemasson.org
See the complete essay and two dozen more in Advanced Plotting, plus a detailed explanation of the Plot Outline Exercise, a powerful tool to identify and fix plot weaknesses in your manuscripts. Buy Advanced Plotting