How to Turn an Idea into a Great Story: Building a Strong Middle #writing #NaNoWriMo #amwriting

Are you doing National Novel Writing Month (NaNoWriMo)? Here's some help as you prepare to dive into your story.
The middle of a story is a trouble spot for many writers. Maybe it feels slow, maybe it feels boring, maybe you can't even figure out what happens next.

A good middle should be filled with complications.

If a character solves his problem or reaches his goal easily, the story is boring. To keep tension high, you need complications. For short stories, try the “rule of three” and have the main character try to solve the problem three times. The first two times, he fails and the situation worsens.

Remember: the situation should worsen. If things stay the same, he still has a problem, but the tension is flat. If his first attempts make things worse, tension rises.

For novels, you may have even more attempts and failures. In my first Haunted book, The Ghost on the Stairs, I made sure each ghost encounter felt more dangerous. As Tania tries to get closer to the ghost in order to help her, Jon worries that she will go too far and be injured or even killed. With enough variety, you can sustain this kind of tension indefinitely (witness the ongoing battle between Harry and Voldemort in the seven-book Harry Potter series).

You can worsen the situation in several ways. The main character’s actions could make the challenge more difficult. In my children’s mystery set in ancient Egypt, The Eyes of Pharaoh, a young temple dancer searches for her missing friend. But when she asks questions at the barracks where he was a soldier, she attracts dangerous attention from his enemies.

The villain may also raise the stakes. In my Mayan historical drama, The Well of Sacrifice, the main character escapes a power-hungry high priest. He threatens to kill her entire family, forcing her to return to captivity.

Secondary characters can cause complications, too, even if they are not “bad guys.” In The Ghost on the Stairs, the kids’ mother decides to spend the day with them, forcing them to come up with creative ways to investigate the ghost while under her watchful eyes.

• For each turning point in the story, brainstorm 10 things that could happen next. Then pick the one that is the worst or most unexpected, so long as it is still believable for the story.

See the "middles" tab to the right for more advice on building an exciting and dramatic middle. 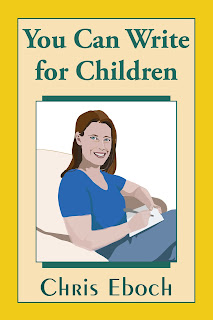 Learn more at www.chriseboch.com or her Amazon page.
Posted by Kris Bock at 5:00 AM