In honor of Halloween, I'm making the Kindle e-book version of my children's novel, The Ghost Miner’s Treasure, FREE today (October 30-31). This is book 4 of my Haunted series originally published by Aladdin/Simon & Schuster. Book 4 can be read on its own. It's a spooky comedy/mystery suitable for ages 8+.

Jon and Tania are traveling with the ghost hunter TV show again, this time to the Superstition Mountains of Arizona, where the ghost of an old miner is still looking for his lost mine. The siblings want to help him move on—but to help him resolve the problem keeping him here, they’ll have to find the mine. And even then, the old ghost may be having too much fun to leave! It’s a good thing Tania can see and talk to him, because the kids will need his help to survive the rigors of a mule train through the desert, a flash flood, and a suspicious treasure hunter who wants the gold mine for himself.

If you stop by to pick up a copy, I appreciate "Likes" for the book's page or agreeing with the tag words (scroll down and click in each box, or simply paste the following list after "Your Tags": Ghosts, ghost story, mystery, adventure, gold miner, middle grade, action, spooky, paranormal, ghost hunters, children's horror, ghost stories for children, Arizona fiction ) 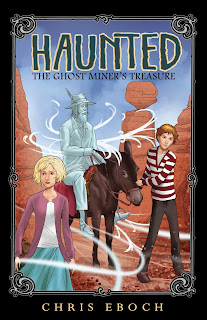 Email ThisBlogThis!Share to TwitterShare to FacebookShare to Pinterest
Labels: Haunted