Today we continue the series of guest authors published by namelos. Carol Fisher Saller talks about writing her historical verse novel Eddie’s War with a little help from her friends. Here’s Carol:

I once calculated that when I was writing Eddie’s War, I averaged eleven and a half words a day. I’ve written elsewhere about how hard it was for me, and how I wrote the scenes out of order as they occurred to me without having a plot or getting to know my characters. I’d just think of a scene—a “vignette”—and write it. Here’s a short one:
May 1939
Sarah Mulberry
In the first grade
she was Sam,
not even all that much
a girl.
Smile as wide as her feet were long,
feet made for puddle-jumping,
fence-hopping,
running from boys.
She could bat a ball and fling a cob
with the rest of us.
In junior high, though,
she became Sarah,
still flashing that smile,
but avoiding the cob fights.
Unless she was
provoked. 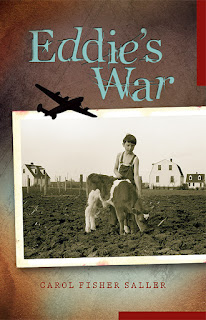 Somehow all the little snippets did eventually coalesce, but not without help from friends, family, colleagues, my editor, and now and then—I’ll admit it—random strangers.
For a while I felt a little guilty using other peoples’ ideas, as though I were cheating. I’m guessing that’s normal for writers: First we resent the suggestion a little and resist it. Then we kick ourselves for not thinking of it ourselves. Finally, when we know that we really, really want to use that idea, we wonder whether it’s fair game.
But surely this is how most books get written. Even if a writer managed to seal herself up in a room and crank out a book with no contact with the outside world, she would still be drawing in some way on all the books and movies and conversations that are swirling in the soup of her subconscious.
So without shame, let me list some of the people who helped write Eddie’s War:
My father, who died in 1994. It’s no coincidence that my dad, like Eddie, was 12 when the war began and had an older brother who was a bomber pilot. Dad kept a little five-year diary during that time, and my book draws endlessly on the historical and farming details in the diary. I also took situations or incidents that Dad gave only a line or two in the diary and I expanded them into full-blown fictional events. 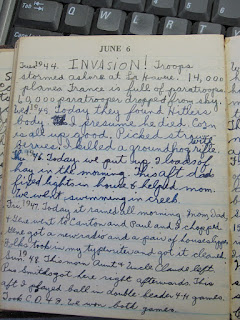 My writing group. Everyone in my writing group gave me excellent suggestions along the way—really too many to remember, let alone mention. One example: in an email response to an early draft, Beth Fama reminded me that before the Japanese bombed Pearl Harbor, Americans were not generally in favor of joining the war in Europe. I had forgotten that. Acknowledging my ignorance pushed me into doing a ton of reading and research that took the book up several notches in authenticity.
My editor. When I took the half-written manuscript to a workshop at the Highlights Foundation, Stephen Roxburgh gave me an exercise of writing a vignette in as few words as possible about a new character who would tell us something important about the main character. I thought up Grampa Rob and wrote a 47-word scene of him duck hunting, with Eddie. From that one short exercise two things happened: (1) I learned that Eddie was my main character, and (2) I introduced a major thread of dramatic tension. Incidentally, Stephen took a pencil and in about 30 seconds reduced the scene to 28 words*:
September 1938
Duck Hunting
Hunkered in the duck blind,
watching,
trying to keep still,
broken reeds
poking through my jacket,
I squirmed.
Long fingers
like barn nails
gripped my neck:
Grampa Rob.
A colleague. When I thought the book was finished, I gave it to a friend at work who is also a novelist, Joe Peterson. He had a lot of suggestions and criticisms, many of which I ignored as being not quite right for middle-grade/YA literature. But one complaint resonated: “As a guy,” he said, “I was really disappointed that you didn’t describe Eddie and Sarah’s date.” He insisted that boy readers would want to go on that date. And then he told me what should happen on the date. Listening to him describe it, I was bowled over. It was so perfect, so important—without it the book suddenly seemed horribly incomplete. Without it, Eddie’s coming-of-age would be totally botched! I rushed home and wrote “The Date.” In the months since the book came out, three (3!) different adult men who have read Eddie’s War have told me that “The Date” was their favorite scene.
A Stranger. In a cab on my way to the airport after the Highlights workshop, we drove along a scenic river, and when I commented on how beautiful it was, the cab driver told me that when he was a kid they used to walk across the river underwater, as a dare. Having a life-long fear of water myself, I was gripped by that tale, and when I got home I wrote “Walking the Spoon,” one of my favorite vignettes. Later, it was a bonus (thanks to Joe) that Eddie was able to revisit the Spoon and resolve things so perfectly in “The Date.”
So did I really write Eddie’s War? Of course I did. There’s a little slip of paper I keep tacked up over my desk that says “Nobody but me can write my books.” I really believe that. For better or worse, nobody but me could take all that grist and mill it exactly the way I did. Your way might be better than mine, but mine is mine, no matter how many people helped me along the way.
_____
*When I sent her the post, Chris wanted to see the original 47-word version of this vignette. You can see how Stephen tightened it by trimming unneeded words—and how much punch it gained when he moved the first two words to the end. (I hope everyone appreciates my willingness to show my draft, warts and all!)
Original
September 1938
Duck Hunting
Grampa Rob. A voice in the other room spoke the name
and Eddie remembered.
Tall, silent. Eddie had been small,
crouching in the duck blind, broken reeds poking through his jacket.
When he squirmed,
a hand gripped his neck, the long fingers like barn nails,
a warning. 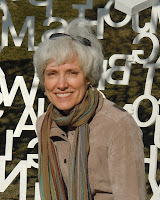 Carol Fisher Saller is a senior manuscript editor at the University of Chicago Press and an editor of the Chicago Manual of Style. She has also worked as an editor of children’s books at Cricket Books. In addition to Eddie’s War, she is the author of The Subversive Copyeditor: Advice from Chicago (or, How to Negotiate Good Relationships with Your Writers, Your Colleagues, and Yourself) and currently writes for the Lingua Franca blog at the Chronicle of Higher Education.
(See the earlier posts explaining namelos: Namelos Guest Authors and Namelos Guest Authors: A Different Kind of Publisher.)
Posted by Kris Bock at 5:00 AM