Here's another excerpt from one of the guest author essays in Advanced Plotting:

Hook ’Em Fast
by Lois Winston
As both a published author and a literary agent, I can clue you in on a dirty little secret: most editors and agents will toss a manuscript aside after a page or two if the voice/style/plot hasn’t hooked them by that point.
I would like to distill this down further and suggest that an author needs to hook her readers with the opening sentence of her book. As someone who has read countless submissions, I’ve come across thousands of openings with what I can only describe as blah first sentences. The authors go on to compound the problem by adding several paragraphs, if not pages, of back-story and/or boring description. An author may have a fantastic story, but if she puts her readers to sleep before they get to that story, she’s got a huge problem.
The first sentence of a book should make the reader want to read the second sentence. The hook doesn’t have to be defined in the first sentence, but that first sentence should lead you into the next, and that one to the next, until you have a paragraph that becomes a hook that grabs the reader and won’t let go. That first paragraph should do for the first page what the first sentence does for the first paragraph, and the first page should do for the subsequent pages what the first paragraph does for the first page.
Here’s an example of a poorly written opening paragraph:
My name is Anastasia Pollack. I’m a forty-two year old, pear-shaped, more than slightly overweight brunette crafts editor at American Woman magazine. A week ago I was living a typical middleclass life. I had a loving husband, two great sons, a job I looked forward to going to each morning, and a yellow rancher with white trim and a picket fence in a New Jersey suburb known for its good schools and easy commute into Manhattan. All that changed when my husband, who used to answer to tall, dark, and handsome but had turned into bald, paunchy, and boring over the years, dropped dead at a roulette table in Las Vegas when he was supposed to be at a sales meeting in Harrisburg, Pennsylvania. That’s when I learned of his secret gambling addiction and that he’d squandered away our life savings and left me up to my eyeballs in debt with a long line of bill collectors having my telephone number on speed dial. As if that wasn’t bad enough, his loan shark is now demanding I pay back the fifty thousand dollars my husband borrowed from him. I don’t have fifty thousand dollars. And last but not least, I’m stuck with my husband’s mother, a card-carrying communist, living with me and my sons.
Now, here’s the opening paragraph as it actually appeared in the published book:
I hate whiners. Always have. So I was doing my damnedest not to become one in spite of the lollapalooza of a quadruple whammy that had broadsided me last week. Not an easy task, given that one of those lollapalooza whammies had barged into my bedroom and was presently hammering her cane against my bathroom door. — Assault With a Deadly Glue Gun, by Lois Winston
The opening of a book should be filled with interesting action and/or dialogue that intrigues the reader and makes her want to continue reading. The opening of a book is meant to suck the reader into the world the author has created. Back-story can come later, trickling in to tease the reader to continue reading more, not as information dumps that pull the reader from the story. A good opening will include only the barest minimum of back-story that is essential for that moment.
If you want your readers to get lost in your plot, make sure you grab them with a dynamic opening. 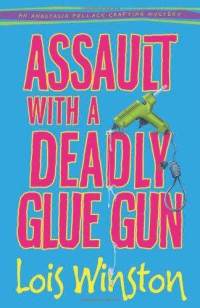 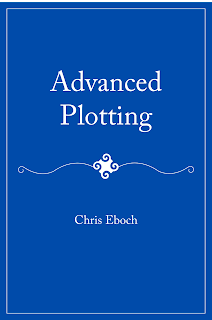 See the complete essay and two dozen more in Advanced Plotting, plus a detailed explanation of the Plot Outline Exercise, a powerful tool to identify and fix plot weaknesses in your manuscripts. Buy Advanced Plotting for $9.99 in paperback on Amazon or as a $.99 e-book on Amazon or Smashwords.
Posted by Kris Bock at 6:10 AM